Comics Continuum have released IDW's solicitations for September, which include a reprint of DC Comics previously reprinted and a disappointing lack of Alien Spotlights. But on the upside we get the start of Schism, and two David Messina illustrated comics!


Ambassador Spock's mysterious journey continues! As Spock makes his way toward Earth, he thinks back on another previously untold tale from his past, this time featuring James T. Kirk, Leonard McCoy and the crew of the original U.S.S. Enterprise!


From Star Trek writer/producers Roberto Orci and Alex Kurtzman and the creative team behind the best-selling Star Trek: Countdown. The story of the villainous Nero continues as we learn how Nero spent the years between his battle with the Kelvin and his reunion with Spock! You don't want to miss this essential chapter in the rebirth of Star Trek! 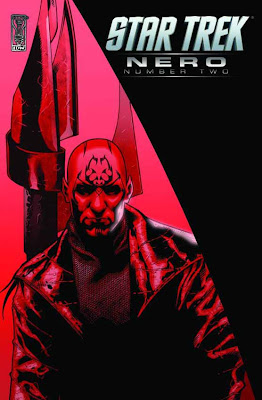 UPDATE: David Messina has also posted this new art on his blog.


War! From behind the scenes, the Klingons loose their unsuspecting puppets, the Romulans, against the forces of the Federation. But the Klingon Emperor is impatient with the slow pace of the conflict, and back on Romulus there are already some who begin to see through the Klingon schemes. The final arc in John Byrne's Romulans tales begins here!


The treacherous but intriguing tales of Star Trek's Mirror Universe are presented in this collection of the 8-part Mirror Universe Saga! It will take all the guile and cunning Kirk, Spock and the crew of the Enterprise can muster if they hope to ward off the coming Empire invasion, and save themselves in the process!