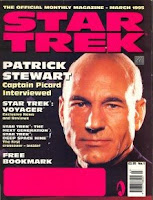 On the TrekBBS, Star Trek Magazine editor Paul Simpson has annouced that as of the next issue the magazine will be being release every six weeks (meaning two more issues a year).

He also announced that issue will give full details of a new product, CD-Rom archives of the Star Trek Magazine prior to the start of the US edition. This will start in February with a CD-Rom containing the first twenty-four issues.

On a related note, you should so get the latest edition of the magazine, lots of good stuff, but the highlight is a timeline of all mirror universe stories.
at 02:46