Time has come again when Pocket Books releases it's solicitationy catalogue sort of thing. In light of the controversy this particular release has stirred up over at the TrekBBS I give you this warning/disclaimer: Use your common sense, the books described are months away from being published and still in production, such early pre-release info is of course subject to change.

Not many new covers in this one as most have already been released. One that is new (though very likely to change as it's even marked as not final) is for the Crucible trilogy hardcover omnibus. No other new details for this release: 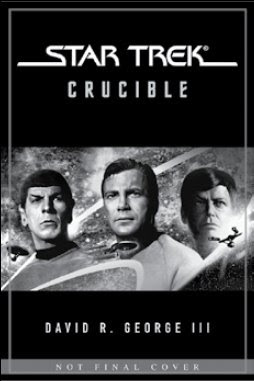 There's also a new cover for the next New Frontier novel, Treason: 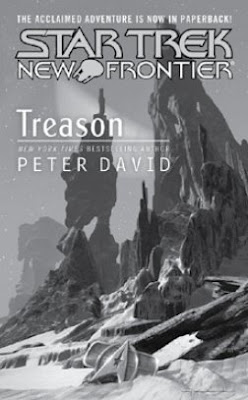 Jumping ahead three years from the events depicted in Missing in Action, tensions within the New Thallonian Protectorate are at a fever pitch following the murder of Prime Minister Si Cwan. The sudden power vacuum will have far-reaching ramifications for Captain Mackenzie Calhoun, the crew of the USS Excalibur, and all of Sector 221-G itself....

A Singular Destiny
The Destiny trilogy changed the Star Trek universe, devastating worlds and lives from every series. Now, the fallout of that apocalyptic saga is viewed through the eyes of an all-new character: Sonek Pran is an outsider, a man who can go places and get things done that no one else can. When events threatening to undermine the galaxy’s attempts to heal itself become increasingly widespread, Sonek’s investigation leads him to uncover a challenge to the Federation and its allies utterly unlike anything they have faced before.

Titan: Over a Torrent Sea
In the aftermath of the shocking crossover trilogy Destiny, Titan’s return to its mission of exploration leads to the discovery of an astounding new world with a complex ecosystem unlike anything Captain Riker and his crew have encountered before. At the same time, while one father mourns the tragic loss of a child, another looks for hope as a long awaited birth draws near.

Voyager: Full Circle
Following the events of Destiny, the broken and weary

crew of the starship Voyager is reunited to spearhead a mission they are uniquely qualified to undertake. But even the efforts of its new Captain to revitalize this wounded crew may not be enough see the mission through, for the journey is paved with blood and deep scars that will not fade...and populated with ghosts from the past.

Author Kirsten Beyer commented that "It sounds like it was written long before the story or novel were anywhere near a final form" (ie, this one is quite inaccurate)

Vanguard: Open Secrets
Following the events of Reap the Whirlwind, this new novel takes the ongoing saga to a whole new level as a new commander assumes control of Starbase 47—while the old one stands trial for treason. Meanwhile, the station’s intelligence officer fights for her life and her very mind, as tensions with the Klingons escalate into all-out war.
at 23:03