Cryptic Studio's webcast thing for Star Trek Online on Sunday (which you can watch, here) didn't really seems to tell a lot new about the game, but it did convey the general enthusiasm of the developers and added a few snippets of information.

The highlight of which for me was that they are making efforts to at least acknowledge the Star Trek universe as portrayed by the books and comics - SCE and IKS Gorkon were name dropped and it was made clear they are at the very least familiarising themselves with the books, though when pushed on the point in the Q&A after the presentation they described the books as inspiration not canon (fair enough given the vast number of them, but hopefully it will lean more to canon-reverence side for the leading edge of Trek-lit, ie. whatever galaxy changing events Destiny depicts)

Other new stuff, the game has been given a date, in-universe, of 2409, and cryptic will apparently be updating there website during the time leading up to the games release with year by year history reports from the Nemesis time period to the start of the game.

The presentation also suggested that after the initial release the game would likely see expansions allowing players to play as cultures beyond the initial Federation and Klingons, suggesting the Dominion and Romulans as likely candidates.

Cryptic's recently added FAQ section is quite good for general info on the game, and look, a pretty picture: 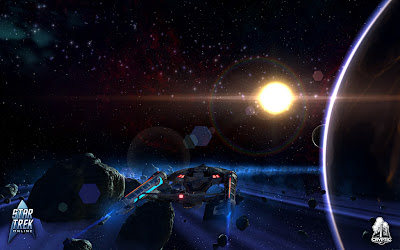