TV Shows on DVD.com have followed up on their earlier report announcing the latest Fan Collective DVD set "Alternate Realities" with the release of the preliminary box art for the set: 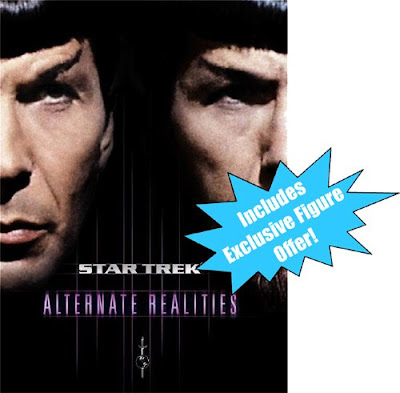 As the art shows the set will also include the opportunity to mail away for an exclusive action figure from Diamond Select Toys, which TV Shows on DVD report will be a version of Geordi La Forge.

This follows on from the Q Fan Collective set that offered a Tapestry version of Picard, in his alternate timeline science division uniform. Of course TNG had no mirror universe episodes, so that leaves either a re-release of the All Good Things... version of Geordi (previously released in a two-pack with AGT Data) or a new Captain La Forge figure based on his appearance in the Voyager episode Timeless, which seems plausible in terms of a cheap modification of existing moulds as DST have already done a Nemesis Geordi.