Good news comics fans, as Steve Roby (of the Complete Starfleet Library) has recently uncovered, there are new collections on the horizon. First the long awaited sixth volume of Checker Books Key Collection reprints of Gold Key Comics (originally due around this time last year) looks to have finally been rescheduled for release in November this year.

Amazon also has listings for two new collections, printed by IDW! The Complete Starfleet Library suggest this is the reason we've not had any new collections from Titan Books lately, it would seem IDW have got themselves the rights to reprint old Star Trek comics from Marvel and DC. They are doing so in a series called Star Trek Archives, with the first two volumes Best of Peter David, and Best of the Borg, due out in September and November. 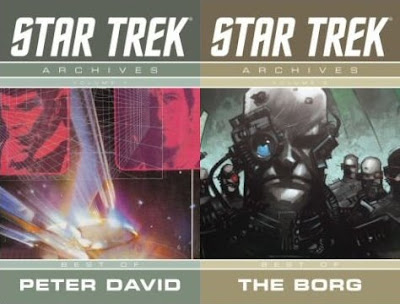 Based on the credits given in the blurbs at the Starfleet Library, Best of Peter David will include the three part story The Return of the Worthy (previously reprinted by Titan a couple of years ago) and Retrospect (also previously reprinted, but by DC in the early 90s). Best of the Borg will probably be the DC four-parter The Worst of Both Worlds, and the Marvel one shot Operation: Assimilation. Which I think will mark the first reprinting of any of Marvels 1990s Trek comics.