Comics Continuum have posted IDWs solicitations for July, which include four Star Trek titles, and the release of two new covers:

Turnaround #5
The final confrontation. Outgunned, outmanned, but never outwitted, Mackenzie Calhoun and the crew of the Excalibur face off against the masterminds behind the theft of the Paradox while the fate of Bravo Station, and Calhoun's wife, Admiral Shelby, hang in the balance.

The Enterprise Experiment #4
The untold fourth year of the Enterprise's legendary five-year mission continues! The Klingons have discovered what appears to be a Preserver obelisk, but can the Enterprise prevent them from unlocking its secrets before it's too late? And what of the Organian truce? The answer lies within! 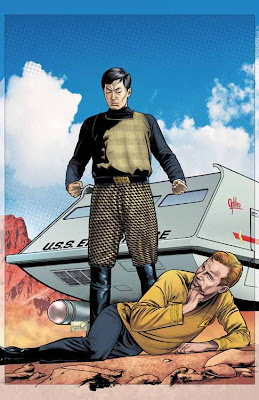 Crisis on campus! The time: 1970. The place: Earth. The situation: Critical! Comic book legend John Byrne continues his first-ever Star Trek miniseries, featuring the enigmatic interstellar spy Gary Seven and his intrepid assistant, Roberta. Following their encounter with Kirk and the Enterprise crew, the duo must go undercover in the Halls of Ivy as students burn their draft cards and National Guard troops patrol the quad. What is the terrible truth behind rumors of an army of super-soldiers -- whose purpose may be much more sinsister than fighting in the jungles of Southeast Asia?

Mirror Images #2
Murderous intrigue continues aboard the I.S.S. Enterprise, as First Officer James T. Kirk sets in motion the machinations that will result in the murder of Captain Christopher Pike, and the ultimate prize for Kirk: the captain's chair! But what does Spock have to say about it -- and whose side is he on? A dark, twisted reflection of Starfleet history continues! 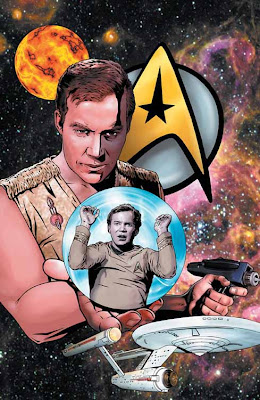 And as this sees the final issue of the New Frontier series, if IDW intend to keep up their four issues a month scheme, that means there must be a new miniseries announcement in the not to distant future...