Comics Continuum have posted IDW's solicitations for June, which includes four Star Trek titles, among them the first issue of the mirror universe miniseries Mirror Images and the first look at the cover for the forth issue of the New Frontier miniseries Turnaround:

NF: Turnaround #4
Nothing in the previous issues has been what it seemed as the true hijacker of the Paradox stands revealed, and Captain Calhoun finds himself face-to-face with the mastermind behind the entire plot. There are only two questions to be faced: Can he stop his opponent... and does he even want to? 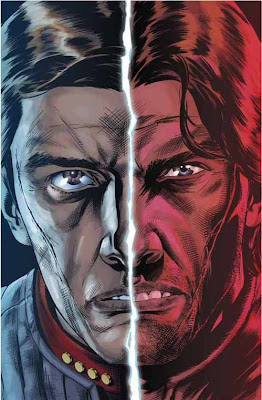 The untold fourth year of the Enterprise's legendary five-year mission continues! A mysterious discovery on Loren 5 sets the stage for conflict between the Klingon Empire and the Federation. With the sudden absence of Organian intervention between the two powers, it could mean all out war. Now the crew of the Enterprise find themselves caught up in a race to discover the true nature of the secrets of Loren 5, as well as why the Organians have disappeared.

The first-ever Star Trek series from Byrne continues! Telling the story of the Assignment: Earth Trek spin-off from Gene Roddenberry that never came to pass, a time-traveling U.S.S. Enterprise intersects with Gary Seven's efforts to save the future from a 1969 crisis that only he and his assistant Roberta can avert!

IDW Publishing's Star Trek: Second Stage continues! A story from one of the most popular corners of Star Trek canon, the Mirror Universe! In the "Mirror, Mirror" episode from The Original Series, an evil Kirk commanded the I.S.S. Enterprise for the Terran Empire. But how did he rise to power, in a universe where treachery is rewarded as much as accomplishment? Witness Mirror-Kirk's plot to unseat Captain Pike and seize command!