As reported by Toy news International, Corgi (and by extension Master Replicas) have extended their Star Trek license to 2010 and added the new movie to their range.

Some new products coming from Master Replicas this year will be two new props; A Star Trek V: The Final Frontier phaser, and a Star Trek: First Contact tricorder. Both will be out in July and feature various lights and sounds: 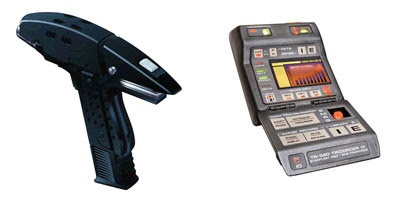 Additionally Corgi will be continuing it's die cast ships range, with the second wave (which was originally to be out last year) of the USS Defiant, USS Voyager and Romulan warbird, out in a few months time (maybe).