Well June was a little slow news wise and only had standard releases, but July has all sorts of stuff coming, so lets see what in store this month:

This months novel is the Lost Era/TNG prequel story "The Buried Age" by Christopher L. Bennett which tells us what Jena-Luc Picard got up to from the loss of the Stargazer all the way up to taking command of the Enterprise-D. This months eBook is the Corps of Engineers story "Ghost" by Ilsa J. Bick. Additionally this month sees the release of the Corps of Engineers omnibus "Grand Designs" which includes novellas numbers thirty-seven to forty-two of the SCE eBook series.

From IDW this month is issue four of Scott and David Tipton's Klingons: Blood Will Tell miniseries, this one retells the episode "Day of the Dove". This month also sees the start of the new TOS miniseries Star Trek: Year Four by David Tischman, which as the name implies, tells us stories from the would be forth season of the original Star Trek TV series. Preceding the first issue of that new series is "IDW Focus on: Star Trek", a behind the scenes look at IDW's Star Trek works including a new short comic story.
It should also be noted last months IDW comics have yet to be released, the third issue of Klingons: Blood Will Tell is just a little late being released this week, whilst the final issue of the TNG miniseries The Space Between is due next week. 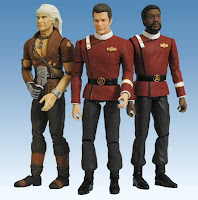 Lots of action figures from Diamond Select Toys this month; Continuing their TNG releases is the Crusher wave, which consists of Doctor Beverly Crusher and Ensign Wesley Crusher in later TNG uniforms and limited edition "All Good Things..." version of Doctor Crusher and a Q figure in Starfleet Uniform.

DST's Wrath of Kahn figures kick off with the first wave consisting of Admiral Kirk and Khan and the limited Captain Terrell and "Double cross" (aka battle damaged) Kirk. Then a second wave comes as retailer exclusives consisting of Sulu, Chekov, McCoy and Scotty, and if you get all those at the San Diego Comic Convention you can get a free battle damaged "Genesis Kahn".
Movie era TOS not your thing? Well worry not, as well as all that this month sees a double pack of Kirk and Kahn from the episode "Space Seed". This month also sees DST's first wave of TOS Minimates, which consists of three double packs: Kirk and Spock, Pike and Vina, McCoy and Scotty and a limited edition dress uniform version of McCoy. Still not had enough TOS figures? Well in addition to all of that this month also sees the first waves of DST's retro cloth figures, this months figures being Kirk and a Klingon.

Other:
As well as all those figures DST also have a couple of sculptures coming out this month, the McCoy part of the "Landing Party" statue set and the first of their Star Trek: Icons series, James T. Kirk.

In Region 1 a new Fan Collective DVD collection should start showing up. A full episode list has yet to materialise for this set, titled "Captain's Log", but in addition to the fan voted episodes the set will includes the captain's actors favourites, with introductions amongst the extra features.

And in Region 2 from GE Fabbri this month are parts twelve and thirteen of their Magazine and DVD collection Star Trek: The Collector's Edition, which will includes six TOS episodes from "The Apple" to "Journey to ".