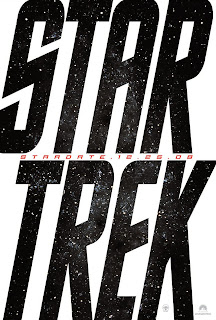 Various sites, including the official StarTrek.com are reporting news coming out of the San Diego Comic Convention of official cast announcements. As rumoured Zachary Quinto will be playing youngish Spock and Leonard Nimoy will be returning in the role of the older incarnation of the classic character. As yet no one has been cast as Kirk.

A shiny new poster was also revealed which if you click the image on the right you can see in bigness. And a horizontal wallpaper version is up on StarTrek.com

I've so far not been reporting much (anything) on the new movie because it's all rumour and will continue in that stance as TrekMovie.com already do a far better job on news of the new movie than I ever could. I shall report official announcements like this one though, along side the usual assortment of every scrap of information I find out about every other facet of Star Trek.

Heroes only just started in the , yesterday in fact, and Quinto's character wasn't in the first two episodes shown (as far as I noticed) so I cant say much about his acting, he certainly looks Spockish. And I'm happy to see the new poster continues to show great respect for the original Trek it was based on, the first poster loyally followed the classic emblem and this new one uses the classic font and a very TOS starscape, it'll be interesting to see how loyally they follow the originals in the actual film.