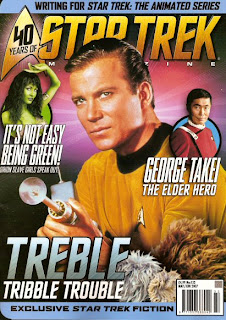 The latest Star Trek Magazine is out this week, number 132 in the , 5 in the . Here's some of the stuff you will find within:


-The big news of the issue, Star Trek Magazine get exclusive confirmation from J.J. Abrams that the new Star Trek movie will be featuring James T. Kirk, still no other details though.

-In a feature on Diamond Select Toys’ latest Star Trek efforts it's revealed that the season one Riker figure in the works may, like the early TNG Picard figure coming later this year, also be issued with his bridge chair.
-The upcoming productions section of the magazine also confirmed DST's Wrath of Kahn figure line will be including Spock, Uhura and a third Kahn variant amongst it's 15+ figures.

-On Star Trek remastered David Rossi noted he would be interesting in continuing the project onto Star Trek: The Next Generation, and that he and others involved in TOS remastered would be ready to go if CBS were interested.
-Rossi's confidence it could be done would seem to confirm that the original film footage of TNG must still exist, otherwise remastered in the series to HD would be impossible.

-This issues book excerpt is from the latest in the Vanguard series "Reap the Whirlwind" by David Mack.

-Other articles include an interviews with David Gerrold, George Takei, John Carrigan (on the fan film "Of Gods and Men"), Rich Berman and Susan Sackett (the last written by Michael A. Martin), a feature on the Orions and an extended feature on Star Trek: The Animated Series.