Newsarama has three articles on IDW's Star Trek efforts with lots of nice facts and previews.

In an article on Klingons: Blood Will Tell, the TOS miniseries starting this week the writers Scott and David Tipton interview each other on the series and Star Trek comics in general, also making light of their Gorn comic, part of the Alien Spotlight series later in the year. They then provide commentary for a five page preview of issue two of the Klingon series. Check out the article here for their thoughts and lots of new imagery. The article also included this David Messina cover for the third issue: 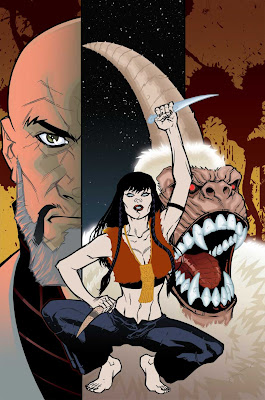 Another article dealt with IDW’s third miniseries, starting in July, Star Trek: Year Four. The article consists of an interview with the miniseries artist Steve Conley. Amongst the items discussed in the article, which can be found here, it's revealed Arex and M'Ress of The Animated Series will be making appearances. There's also some preview art.

Finally with an article sporting this polished bit of art for the TNG miniseries The Space Between: 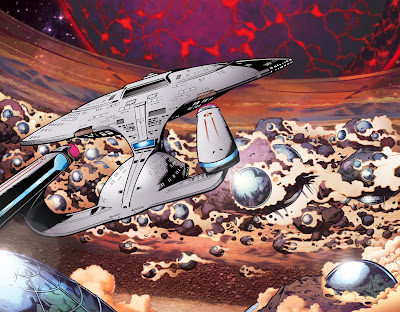 There is a general overview of IDW's efforts, to be found here, the article includes a full list of writing credits for the Alien Spotlight series:

On future projects it suggested more TOS efforts from anywhere from TV to movie era, and potentially tie ins to the new movie due out next year. Also mentioned was the desire to do additional alien spotlights and a continued intention to work exclusively with TOS and TNG for the time being. Though worry not, the writer of the article and IDW editor Dan Taylor would also like to explore DS9 and has stated elsewhere he's interested in getting Peter David to work on New Frontier comics.