Comics Continuum has announced IDW's July releases including two new Star Trek comics, issue four of Klingons: Blood Will Tell and the first issue of Star Trek: Year Four, which it seems will have something a bit extra coming before it:

Blood Will Tell 4:
Another look at the struggle between the Federation and the Klingon Empire, from the perspective of the galaxy's fiercest warriors, the Klingons! This month, a handful of Klingons battle for control of a Federation starship in this alternate view of the classic "Day of the Dove". Will they be able to commandeer one of their enemies' most powerful vessels? Or are they themselves merely pawns in a larger plot?

Year Four 1:
Space. The final frontier. This is the voyage of the Starship Enterprise. Her five-year mission to explore strange new worlds? It continues here, with the launch of Year Four in the Original Series' five-year mission. Boldly going where no man has gone before are writer David Tischman and artist Kelsey Shannon, who is providing full art and colors on this opening issue, as well as a cover that hearkens back to '60s Star Trek comics. Up first, Captain James T. Kirk and the crew of the discover the , the multi-planet construct of a dead civilization, run by a brilliant genetic scientist who's obsessed with repopulating it. When Kirk discovers the scientist's secret, his creations revolt, forcing Kirk to make a hard decision and pushing the into the crossfire! 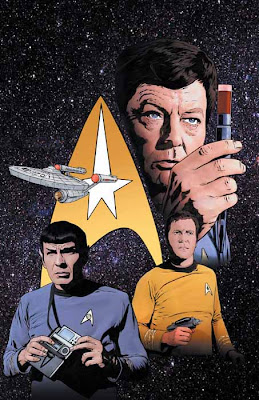 and the bit extra...
IDW Focus On: Star Trek:
Premiering a week before the debut issue of IDW's new Star Trek: Year Four series, this special Focus On... comic book introduces Star Trek: The Original Series comic book to the IDW universe. Included in this issue is a special, all-new, standalone 5-page Star Trek story, written by David Tischman and illustrated by Year Four artist Kelsey Shannon. This introductory tale will only be available in this special 24-page issue, which also features behind-the-scenes sketches, additional artwork, creator interviews and more. Catch up with IDW's Star Trek universe before the story hits warp speed the following week!

The focus on is a nice little extra suprise, I look forward to that and of course the new comics!