IDW's titles for April, and other Star Trek comics news

IDW have published their solicitations for April, which include lots of new Star Trek comics, with both the start of one miniseries, and the end of another, and a good dose of TOS too. Continue below for all April's titles, and more Star Trek comics news.

The big news of the month is the start of a new four-issue miniseries, Manifest Destiny, a story featuring the Klingons. This is being marketed as a fiftieth anniversary event series, and will be released fortnightly, so April will see two issues.


Celebrate the 50th Anniversary of the STAR TREK franchise in 2016 with this all-new bi-weekly comics event beginning in April! It's Captain Kirk and the Enterprise crew vs. the Klingons in the ultimate showdown! Art by STAR TREK/GREEN LANTERN fan-favorite Angel Hernandez!

This first issue will apparently be longer than usual, noted as a forty page book (rather than the usual thirty-two). It will also be issued in a Klingon-language edition!

There will be at least six different covers/editions. The standard cover is from the issue artist, Angel Hernandez. The subscription cover is a homage to Bob Peak's The Motion Picture poster, by Tony Shasteen. There will also be a variant cover from Rachael Stott (not revealed yet). Then there will be Klingon language editions from the same artists (none have been released so far, so it's not clear if the same artwork will be reused for these or not). 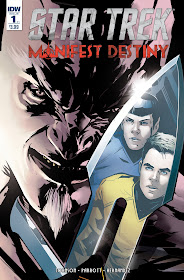 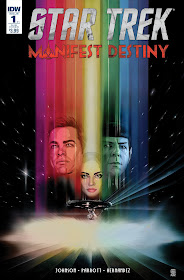 
The blockbuster mini-series continues as Captain Kirk and the Enterprise crew face off with the Klingons in deep space... a conflict that could ignite all-out galactic war! Don't miss this special event celebrating the 50th anniversary of the STAR TREK franchise!

This issue is back to the regular thirty-two pages. There will be three covers, with the standard cover again by Angel Hernandez. Tony Shasteen continues the poster homages for the subscription cover, this time based on Bob Peak's Wrath of Khan poster. And J.K. Woodward provides a further variant cover (not released yet). 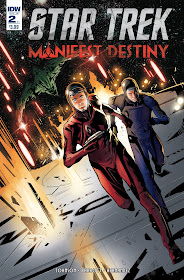 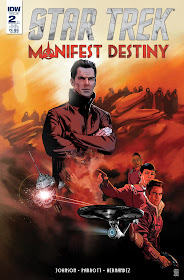 J.K. Woodward did recently post this snippet of something he is working on, on his Instagram. perhaps a suitably Klingon cover for this book? 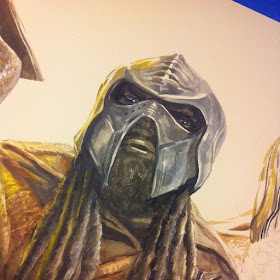 
In the epic finale of IDW's new hit mini-series, past and present collide as our new crew finds the most unlikely allies in the heart of uncharted space! Can they finally come together and change the future of Starfleet forever?

There will be three covers for this issue, the main one by Derek Charm, a subscription cover by Stephen Thompson, and further variant by Malachi Ward. Only the Charm cover has been revealed so far, which curiously features an NX class ship: 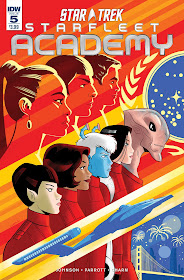 
"Legacy of Spock" continues here, in this special story celebrating the 50th Anniversary of the Star Trek franchise! Spock Prime reflects on the alternate timeline he left behind... but he faces a new threat in the present, as the Romulan Empire threatens to end the Vulcans' search for a new homeworld before it begins!

There will be two covers for this one, the main cover by Tony Shasteen, and the subscription cover by John Watson. The latter cover is part of IDW's Art Appreciation Month, which will see various titles released in covered inspired by classic works of art. This Star Trek edition is a take on Vermeer's "Girl With a Pearl Earring" (thanks to the commenter below for identifying it!). 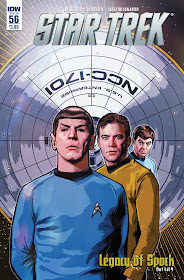 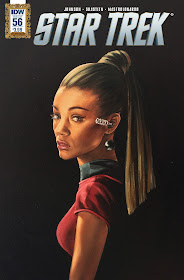 Part one of this story, in the previous issue, will be available in a cover by J.K. Woodward, who has recently posted a blog detailing his process for creating the artwork. If you're interested in how this picture came together, you should definitely go and have a look! 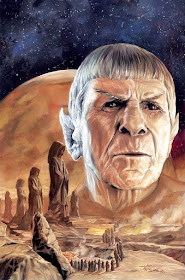 
Boldly going… where it all started! Presenting the first comic book adventures of the U.S.S. Enterprise and her crew! Fully remastered with new colors, volume 5 collects issues #25–28 and #30–31 (#29 was a reprint of #1), including stories "Dwarf Planet," "The Perfect Dream," "Ice Journey," "The Mimicking Menace," "Death of a Star," and "The Final Truth."

This book has a new cover by Michael Stribling: 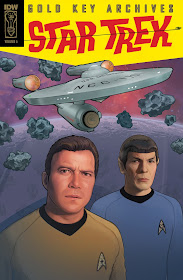 If you're a fan of John Byrne's New Visions comics you might notice no mention of issue eleven, which was already delayed from the usual bimonthly release for that series when it was missing from the March solicitations. Posting on his own forums, Byrne seemed to be expecting it here:


Bit of bad news. Chris Ryall informs me that the tsunami of 50th Anniversary material IDW is publishing this year has caused NEW VISIONS 11 to be pushed back a month, to April.

Finally, you can get another dose of classic Trek in the forthcoming Star Trek: The Classic UK Comics, Volume 1, the first reprints of the very rare UK comic strips that are finally getting a reprint in March. Rich Handley recently wrote an article for StarTrek.com explaining the history of the series, and it's path to this long-awaited reprint; check it out for all that an a few more preview images like this: 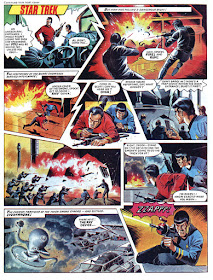 For full listings of all the upcoming Star Trek comic releases, and links to my previous coverage, hit the comics button on my 2016 schedule page. You can also find further comics series reading lists on Trek Collective Lists, including a look back through the entire nuTrek ongoing series, and details of the Gold Key Archives books.