2013 spoils use for choice when it comes to Star Trek calendars - Universe Publishing have taken the reins with the main US calendars, offering four different Trek designs, including the latest editions of the long running TOS and Ships of the Line calendars. Meanwhile ML Publishing has stepped in to celebrate TNG's 25th anniversary with the first TNG calendar in years. In Germany Panini Books have released a Star Trek movie poster calendar. And in the UK Danilo have also got two Trek calendars, a second TOS calendar, and what has until now been a mystery; what Amazon lists as the "Official Star Trek Ships 2013 Calendar". With a week to go until expected publication, Amazon has put up the covers for this final calendar, revealing to be specifically focusing on the ships of the latest Star Trek movie. Each month features either a still from the film, or concept art, with lots of the Enterprise, joined by the Kelvin, Narada, Jellyfish, and shuttlecraft. There aren't any new images here, but for any fans of the new ship designs from the film it will be a pretty nice way to get some big prints of the new ships. Here are the front and back covers: 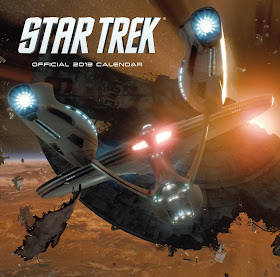 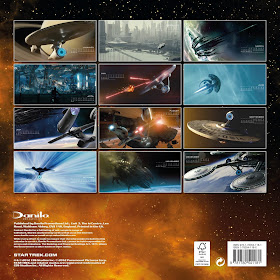