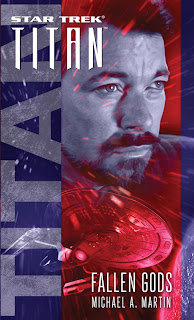 The latest Titan novel, Michael A. Martin's Fallen Gods, is out right about now. Simon and Schuster has posted an excerpt. Here's a little snippit:


Captain Will Riker noted that he’d reached his destination nearly two minutes early, and decided to take that as a good omen.
Standing alone in the dimly illuminated main observation lounge, he paused to gaze out the panoramic window and take in the breathtaking vista it displayed. He looked outward across Titan’s broad bow into the mysterious, tantalizingly luminescent depths of the Gum Nebula that lay in the starship’s path.
What are we accomplishing out here, really? he thought. Lately his dreams had been plagued by images gathered from a dozen or more worlds—Federation members and allies—that had been hit hardest during the Last Borg Invasion. Deneva, Vulcan, Andor, Tellar, Qo’noS, none of these planets were done picking up the pieces yet. Could they ever recover fully, considering how much wholesale death the Borg Collective had dealt?
Riker turned and glanced around the observation lounge’s interior. He had ordered that the room be made available exclusively to him at fifteen hundred hours, the scheduled time of his conference with Admiral de la Fuego. He would have preferred to have Deanna at his side, considering one of the topics to be discussed. However, this was a command-level affair, for the captain’s eyes and ears only. Some of the ground to be covered would be sensitive, which was why he wanted the meeting conducted in full three-dimensional holography. If Admiral de la Fuego expected to ram an unpalatable policy down his throat, she’d damned well better be prepared to look him straight in the eye when she did it.

You can read the rest of chapter one, here.